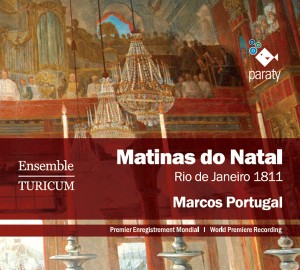 The world premiere recording of Matinas do Natal by Marcos Portugal. This monumental work, composed in Rio de Janeiro in 1811 and recorded by the Turicum Ensemble, is the first sacred work by the composer to be successfully restored by musicologists.

Marcos Portugal forged a brilliant career as a composer, equally at home in Europe and the New World. Having spent ten years composing sacred music and opera in Portugal, Marcos Portugal moved to Italy, where he spent an intense six and a half year sojourn. During this period he wrote twenty-two operas that enjoyed unprecedented success; productions were counted in the hundreds and concerts in the thousands.

Diapason (5 Diapasons)
This Christmas Mass allows us to become acquainted with one of the famous – and prolific –composers of the early 18th Century (with more than 40 operas to his credit). The orchestral treatment is remarkable. The absence of violins dictates the importance of the harmony, and the clarinets are trusted with most of the delicious introduzioni. They are magnificently played and accentuated here, as are all the numerous different instrumental combinations.

Classique News
Portugal revealed! A celebration of constant inventiveness and mirth, the work dazzles with its intelligence. It is a picture of disarming naiveté, of irresistible popular taste, the fruit of the most unlikely crossbreeding. It is a nursery recomposed, which vividly recreates the tender effusion of worshipping the Child, the Savior of the world.

Lexnews
The work is a testimony of what sacred music could be in the distant lands of Brazil in the early 19th Century: there is a certain emphasis that reflects a lush nature; the detailed ornamentation underlines the monarch’s concern to project greatness despite his exile; the many naïve scenes allow the work to be accessible to a large number of worshippers in this major event of the liturgical calendar. This kind of album, unusual, clever, of an intelligence and an unusual sensitivity, is a wonderful change from the usual discographic release, and revises our vision of classical music as being reserved only for geniuses.