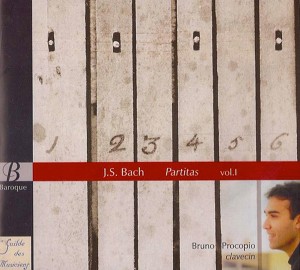 With the French Suites and the English Suites, the six Partitas for Harpsichord form Bach’s trilogy of keyboard suites. He must have thought of them as an essential part of his creative development, because he himself arranged for their publication in Leipzig between 1726 and 1731, when he compiled them and had the complete collection printed as Opus 1 under the title Clavier-Übung bestehend in Praeludien, Allemandien, Couranten, Sarabanden, Giguen, Menuetten und anderen Galanterien (Exercises for the Keyboard Consisting of Preludes, Allemandes, Courantes, Sarabandes, Gigues, Minuets and other Galanteries). The title Clavier-Übung had been used before, between 1689 and 1692, by Johann Kuhnau, Bach’s predecessor as Cantor at the Church of Saint Thomas in Leipzig. Should it be considered Bach’s homage to his illustrious forerunner? Was Bach encouraged by the very favorable response that had been received by the seven suites in Kuhnau’s Neue Clavier-Übung? In any case, his Partitas were a success in terms of sales, if we are to believe Johann Nikolaus Forkel, who said that “keyboard compositions of such excellence had never been seen or heard before.”

In 1731, Bach held the exhausting position of Cantor at the Thomaskirche in Leipzig. He had reached the age of forty and composed such essential works as the first book of the Well-Tempered Clavier, but he had not yet published any of his compositions.

Although modestly titled “Exercises for the Keyboard”, the six Partitas, offered by their composer “to music lovers as refreshment for their spirits,” are works of an altogether astonishing richness and complexity. Like all of Bach’s instrumental suites, they are organized around the four traditional dances of the dance suite – allemande, courante, sarabande and gigue – but here the composer reaches the summit of his art in his handling of the suite for keyboard. He goes beyond the strict framework and achieves a complete and original synthesis of the major European styles, Italian and French in particular, that had heretofore characterized the suite. One of his major innovations is the insertion between the conventional dances of several “galanteries”, which are lighter pieces or dances such as minuet, scherzo, burlesca or passepied, and by introducing each Partita with an extensive overture. Moreover, the Partita No. 2 does not conclude with the traditional gigue, but with a Capriccio. Bach’s Partitas for keyboard represent his final contribution to the dance suite form, just as this genre began to run out of steam in the face of the increasing popularity of the sonata.

We are seized by the authority of his intent, the control of his touch and the originality of his discreet rubato.
If one feels the influence of his masters (Hantaï, Rousset) in the thorough exploitation of the instrument’s resources, his way of perceiving the structure behind the ornamentation is as personal as it is convincing.

In the next CD, young Brazilian harpsichordist Bruno Procopio, a student of Pierre Hantaï, displays many of his teacher’s most distinguishing traits – relentless rhythmic drive, passionate precision and intelligent understanding of construction. But he adds a personal touch that makes these difficult works his own turf. A brilliant first recording justly awarded five stars by Diapason Magazine.

The young harpsichordist Bruno Procopio decided to add his own version to the catalog by recording a first volume here. And the least we can say is that he already has more than one string to his bow…
In these three Partitas, Procopio’s playing has a rare precision, sharpened and swift, with dazzling control. The gesture is detached, bright, and the choreography implied in the musical text emerges from within.