‘Rameau in Caracas’, Soloists of the Simón Bolívar Symphony Orchestra of Venezuela 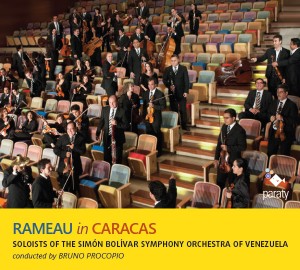 The Soloists of the Simón Bolívar Symphony Orchestra of Venezuela invited Bruno Procopio to conduct a programme dedicated entirely to Jean-Philippe Rameau. Discovering French Baroque music was an astonishing adventure for the Venezuelan musicians, and it marks their first foray into 18th century French classical music. This recording is also a foretaste of the celebration to come in 2014: the 250th anniversary of the composer’s death.

Above all, I wanted to spark the curiosity of the orchestra’s musicians for a kind of music which they never would have discovered on their own. I also wanted to work with an orchestra that had no experience of French Baroque music, in order to build a musical identity from scratch. This allowed me to search for my own vision of this music. To my delight, I found fertile ground.

During the break at one of the rehearsals, a musician came up to me and whispered: “Maestro, this is the best music I’ve ever played!” I could not have received a better reward.

Awards:
The magazine Classica’s CHOC, 5 stars by the magazine Diapason, best disc of the week by Le Figaro and by the British radio Classic FM.

“The orchestra, in the hands of Bruno Procopio, frolics about in the thorniest garden in Baroque repertoire. […] You won’t believe your ears. This miracle comes all the way from Venezuela. The firmness of phrasing, the mastery of ornamentation, the sparing use of vibrato, the perfection of balance, the lilt of the minuets, the whirligig of the passepieds, the naturalness of the style… […]

“From the first impatient Ds of the overture to Zoroastre, one knows that the gamble has paid off: this Rameau will leave our head spinning. But beyond this contagious energy and boundless enthusiasm, which are already very appreciable (and rare!), the musicians of the Simón Bolívar Orchestra display a stupefying discipline and mastery of style, allowing then to sketch a gracious passepied and keep their place in a chaconne’s maze.”

“The result is sumptuous, magical. It’s a real bombshell. It’s not difficult to predict Bruno Procopio’s future: resplendent with all the multicoloured richness of “diversity”.